Children's Crossing in the Republic of Cyprus 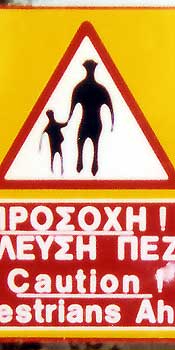 Our first find from the Y2K (I'm still feeling the thrill of the bug) did not give any reason to happiness, and neither did more recent finds.

The first board features two weird creatures. Are we looking at a father with child and is the child trying to escape? Is it abducted? Are we warned not to hit any extra-terrestrial pedestrians? Who shall tell.

In the first group the boy is taller than the girl and he steers her from behind.

It is a configuration found in several European countries (e.g. Belgium, Portugal, France).

The sign comes in two versions.
⦿ Type Ia: the girl prefers kind of a page boyish style.
⦿ Type Ib: features a girl with a poney-tail like in several European countries.

In the second group it is the girl who is the boss. She knows and shows the way.

The drawing comes also in two versions with a different haircut each: again a poney-tail and a page-boy style.
⦿ Type IIa resembles the British drawing except for the girl's head which is a featureless dot in Great Britain.
⦿ Type IIb with the Prussian cross is identical to the most common sign in Germany. She arrived here with her father who is a Man at Work in Lemesos. 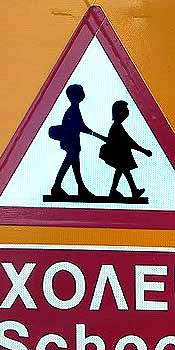 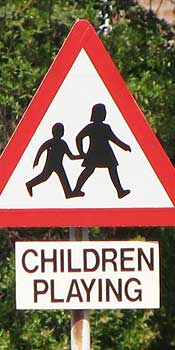 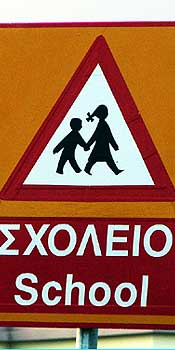 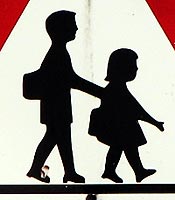 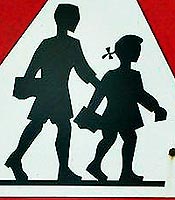