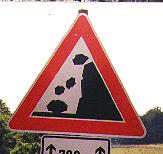 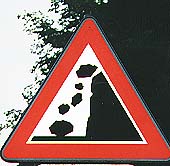 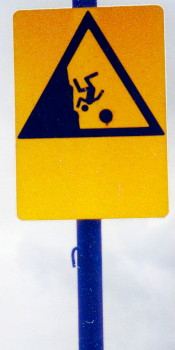 Feldberg, 28.VIII.2002;
pict. C. Vanhercke
German boulders act as good children of their nation: they strike fear by their size. The 5-stone version is most commonly found.

Don't miss the stone which is already down on the ground; this is a rare occurrence. Visit Portugal and Spain for other examples. In both countries the boulder has been deformed by the impact. The German artist, however, froze the move­ment on the very moment of touching down, before any distortion could happen.

Our last sample is not easy to interpret. It all depends on the meaning of the huge black dot. If this dot represents a rock then we are looking at a Fallen Rock Sign. If not then the find can't be part of the collection.

A similar sign which is clearly no Falling Rock sign — because the caption says dāng xīn zhuì luò — is reported from Hanzou, China: in that case no boulder is shown next to the person. Other people falling down accompanied by rocks were found in f.e. Faeroe and Canada.