Malaysia is rather well sampled and we have a pretty clear idea about roadsign fashions there: rather more interes­ting than beautiful.

Two main approaches can be found:

Of the first kind we have two specimens. One is almost a copy of the original in Great Britain. There is a slight differ­ence in the boy who is wearing shorts. That is not custom­ary in other countries of the UK group.

Dress code is important in Malaysia — spring of 2015 news­papers wrote that tourists also are expected to com­ply in some regions, or stay away — and its roadsigns are reflecting this. That is most obvious in the Langkawi find were the female person covered her head.

Clothing in the UK group of crossing signs
Almost all signs reported are of the widespread kind with two adults holding a document folder and the man holding the woman's arm.

The signs at the bottom are pentagon shaped. They are warnings for a school crossing. Diamonds are suppos­ed to alert for a pedestrian crossing. Therefore, one would expect to see people with, respectively without bookbags on both types of signs. Most countries, however, don't bother and apply the same template always (we have a correct example in the U.S.A). 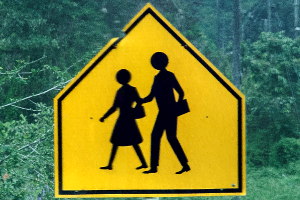 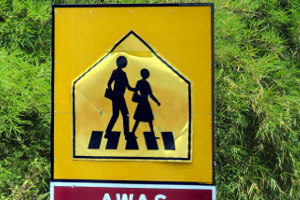