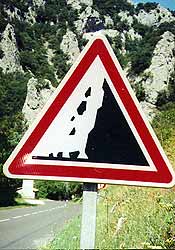 The most common kind

is found throughout the country. It is a modern design with angular boulders. Four of the boulders are in the air and three are resting on the ground — which is rather unusual and limited to very few countries (e.g. Bulgaria).
There is almost no variation in the design. On one occasion only a road sign with boulders with smoother edges was found. In this aberration one of the rocks lies on its shortest side. I say that is a trifle improbable.

The most variable kind 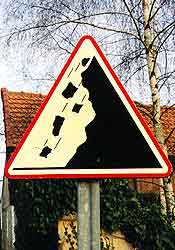 VI.1998; pict. A. Guët
The second group is an older design rapidly giving way to the modern panels but still present at quite many locations. Road signs of this group count five stones and are further characterized by irregularly shaped boulders, speed indicating stripes and a corrugated cliff.
There is a wide range of variations in the shape of the rocks, the position of the rocks, the number and length of the stripes - in one find they are omitted - and the shape of the wall. We've also one mirrored specimen carrying an extra boulder.
(More about speed and impact in: Norway, Pakistan, Turkey, Romania or Spain, where we've found a panel enhanced with modern conveniences.) 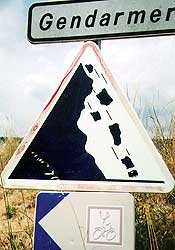 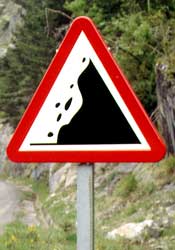 contains some roadsigns having in common that they are quite different from the previous samples and that they are encountered only one of two times.

The first sign belonging to this class is up until now only found in the Pyrenees. On both sides of the range. Which means that the design could come from Spain. The drawing is characterized by smoother lines in general and six boulders like rain-drops. 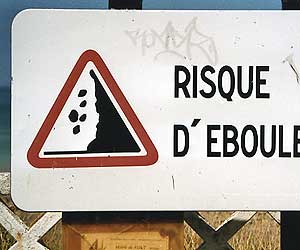 Ault, 28.VII.2008; pict. A. Guët
This second find wories me. Although the sign wasn't found on the road —and therefore isn't a roadsign properly— it could signal a trend: a foreign design gaining ground in France.
The same drawing with the boulders drifting away from the rockwall was found in Cyprus, Greece and Iceland.
Path: Home / Country List / Falling Rocks in depth / Rocks from France
e-mail:
More road signs from France: Men at work - Children's Crossing signs