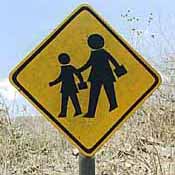 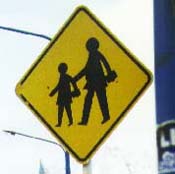 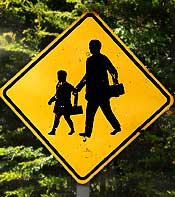 Tolhuin, XII.2006;
pict. B. Hoeyberghs
Are we looking at two girls? The likely precursor found in Tolhuin gives us reason to believe more in two boys. In any case, I cannot recognize any clear sex indicating features. This is most unusual as children on the road are —it seems by worldwide agreement— of opposite sexes.
One of my readers pointed out that it was custom that children in Argentina weared kind of a dust-coat at school. Thus boys and girls all looked similar and this was probably the origin of this typical and authentic drawing. 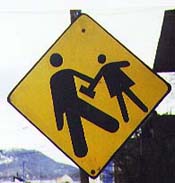 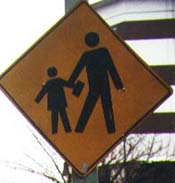 Buenos Aires, VII.1996
The finds on the first row aren't exactly beauties, but they don't hurt the eye like the monstrosities encountered in 1996 and which were still around in 2006. In ten years time they seem to have evolved into more normal body proportions.

During the same time a new line hit the roads closely related to the American kind. The indigenous design will surely quietly die away. It's the fate of most things indigenous in that part of the world. 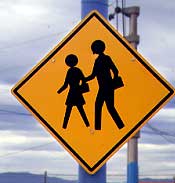 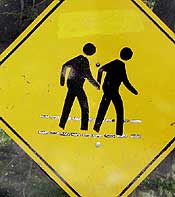 P.N. Glaciares, XII.2006;
pict. B. Hoeyberghs
Some of our finds from Argentina are slightly better. The artist, probably inspired by what he saw around him, decided to include a neck. At another case he managed to avoid the transparency trap (read more about that in Hawaii).

The dashed (?) lines are difficult to inter­pret. It looks like someone tried to hide them. Lines, if they are drawn, are usually uninterrupted like in Hawaii. Very few countries use dashed lines: e.g. The Gambia, Indonesia, Philippines.

The find from P.N. Glaciares is mirrored and is therefore adapted to a left hand side driving situation. The design comes close to the Australian drawing, though several points are different. 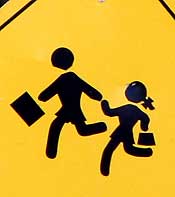 The roadsign from El Calafate belongs to the Mediterranean sign group (explained in Malta). Take a closer look at the head of the boy. I first thought it was just a small production flaw, but then I noticed the weird shape of the male's head in the sign from Ushuaia on the previous row. I now think that this is by purpose, perhaps to bring a bit more life into the scene.

A single child on the way to school is only rarely pictured. Argentina is special because we have found several. Usually, children on their own are not on their way to school. They are in Argentina because we see them carrying a bookbag (or a slate?). The only country where this kind of sign is also common is India. 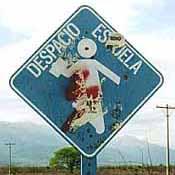 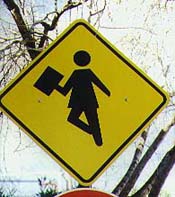 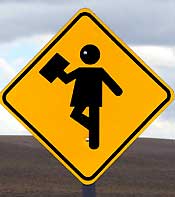 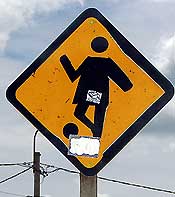 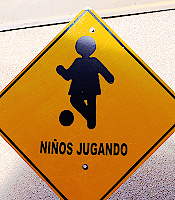 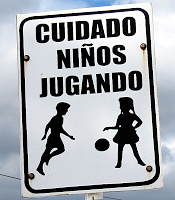 Ushuaia, 27.III.2018
Our next finds picture children playing around. With a ball like in most countries where this type can be found (e.g. Chile, Canada).

The panel with a two children is exceptionally well done for an Argentinian roadsign. It brings other similar signs from Great Britain and Trinidad & Tobago to the mind.

There is a caveat though. In both named countries the children throw balls. They are clearly playing together. I am not so sure that this is also true in Argentina. I see it like the girl is bouncing a ball and the boy is at the point of kicking the ball away. Adults will soon be called upon. 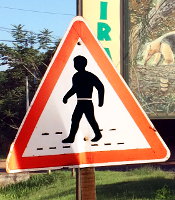