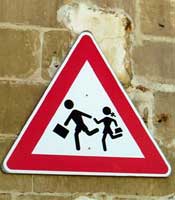 Zurrieq, II.2004; pict. D. Frendo
Modern ugly match-stick design prevails over the old fashioned road signs. Everywhere, from Spain to Lebanon, this drawing spreads like wildfire. It's so sad. No wonder that so many airline companies are forced to keep their planes grounded. Why would anyone still want to travel if there is exactly like here? (Actually some people only do set out if that is guaranteed.)

But to delve for new, different stuff is only part of a collector's life. Most of the fun comes later. A real collector spends time and again with organizing, sorting and re-organizing.

In the past a particular design was kept within the national borders. Nowadays a succesful drawing can spread over several countries giving us the opportunity to lump them together into groups. One of those groups is the Mediterranean Sign Group.

A sign belongs to this Mediterranean Group if it fits most of the following:

Panels of this group were originally only found in the Mediterranean region (hence the name) and in countries with close relations to that region. Men at work signs show similar behaviour (the Mediterranean Workforce explained), but falling rocks are resisting any attempt to bring them together. 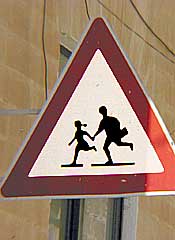 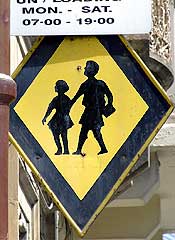 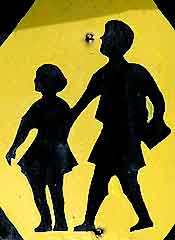 Not all older roadsigns are shot down yet. We had a second spotter on the islands and she came back with two nice finds.

The first coming from the main island resembles very much some older panels from Italy.

The second find comes from Gozo. Ask people around you about Gozo and count the answers. You probably won't get far. Gozo is one of the three islands making the Republic of Malta. The other islands are Malta and Comino. (See, this site is rife with valuable information.)

The children's crossing sign from Gozo was attached below a no-parking sign (except for un/loading). It's not clear if this explains the diamond shape - Remind the schoolbus stop in Italy which is also indicated with a shape deviating from the usual triangle. I think it's an old forgotten sign : it hangs at a considerable height and the detail in the drawing comes, no doubt, from times long past.

One last observation: the girl isn't walking. She poses like a ballerina. Find other signs with remarkable detail in Turkey, Denmark, or Austria.