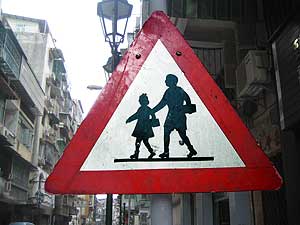 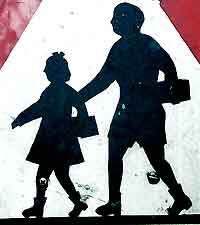 Macau, IV.2007; pict. D. Young
A good old drawing full of detail. And more: this find is completely different from the Portuguese children's crossings. Even from the past times version. After all those years of Portuguese rule I would have expected their design. Or alternatively that the Chinese would have sown the region with their own mediocre design. The latter were probably too busy building damms and olympic sites.

This drawing stands apart as a real collector's delight.

Both children are wearing short (rubber) boots. They are ready for the monsoon. I haven't seen that in any other country, except perhaps in Turkey.

Girls - or their mothers - almost never choose for a hairdress of the kind shown here (take a glance at Monsieur Jean's collection). We've encountered this style only in the Czech Republic and once in France (clearly not an official sign 'A13a').

Just one last remark: the boy is probably a trifle too heavy for his own health. Notice also his short trousers.