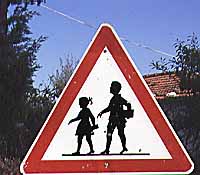 Both finds feature a fine drawing, close to the Austrian and the most common Belgian kind. They are a bit more static than the signs in the aforementioned countries and the children don't hold hands which is rather unusual.

And there is more.
+ We have two new hairstyles for Monsieur Jean's show-case.

+ Look at the boy: his head and cap. And his legs. He wears short trousers and long socks. Or is it a kind of traditional attire?
Bayburt -> Ispir, VII.2002;
pict. Vanacker & Kesteleyn 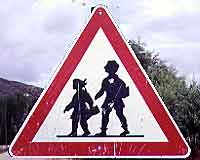 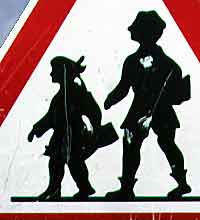 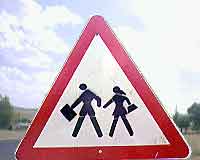 We can be short about this one. A taste-less modern design where the children are barely recognisable as people.

Note also that the designer behaves as expected: on the new drawing the children swap positions. Compare old and new in France and Italy to see the same phenomenon.

Final remark: If Turkey stands firm about one thing in the negotiations for E.U.-membership it should be against modernization or euriformization of the road-signs. 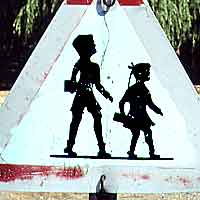