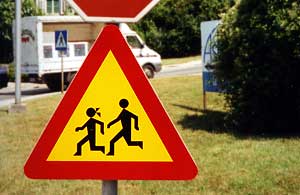 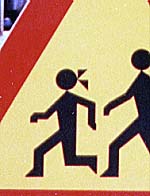 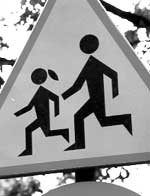 But — Yes, I know. I will now ruin the happy feeling. — the drawing is far from perfect. Upper and lower leg are out of proportion and it looks like they are glued to the road. They will never reach the beach (Portoroz is a seaside resort).

We've found a similar children's crossing in Poland where the girl got a slightly different haircut.

The next set of pictures illustrates a approach emerging in many countries (e.g. Denmark, Bulgaria). The idea proba­bly is that Children love to play. So let's play with the sign. And that's what happens. 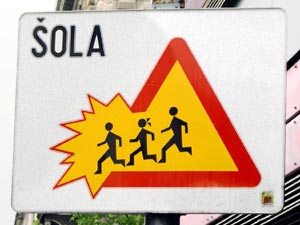 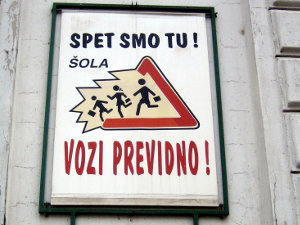 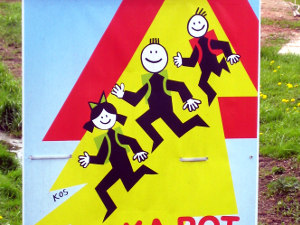 Ptuj, 11.IV.2012; pict. J. Breine
Our samples carry Slovenian words for Watch out, School, Drive carefully but the message is probably lost because the drawings suggest a much younger audience than normally found behind the wheel and drivers will not recognize them as warnings.

Even who pays attention will have trouble understanding their meaning. Do I need to be prepared for an explosion and a break out? Will children fall from the sky? Is the girl in red telling me that children are not allowed to leave the triangle? Are there cybernetic children on the road — with valves and earphones on their excentric heads?

Is there any research supporting the better performance of this kind of designs? 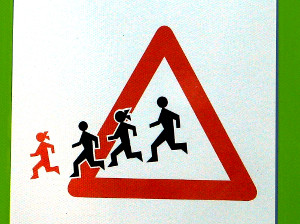 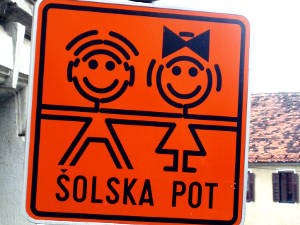 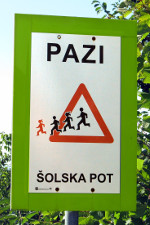 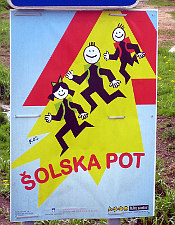 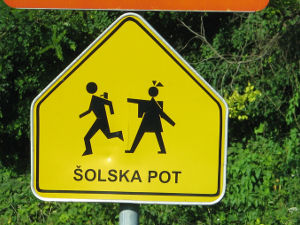 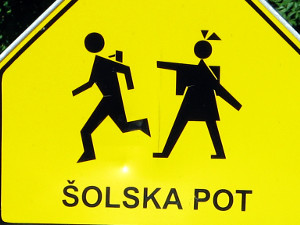 Velike Lasce, 26.VIII.2008; pict. J. Hoeyberghs
The find of the yellow pentagon is most unsettling. The shape of the sign betrays influence from overseas. That alone is already bad enough, but look at how the poor children are drawn.
Two triangles point to her head and what is it on her shoulder? Can't be a rucksack, but then what is it? And her arms, aren't they a trifle too long? 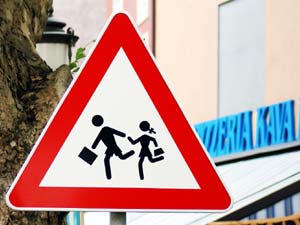 Izola, 3.VI.2008; pict. J. Torfs
Some finds suggest that Slovenia made the decision to join the Mediterranean club. Road signs like the specimen from Izola are found in many countries around the Mediterranean Sea. Though I don't like them, I prefer them above the local breed — See Malta for a discussion of the features.
Path: Home / Country List / Children in depth / Children's crossing in Slovenia
e-mail:
More roadsigns from Slovenia: Men at work - Falling Rocks