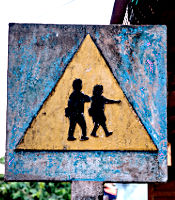 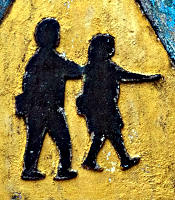 Our first find stands out because it's made of concrete and features a triangle on a rectangular canvas. In the early days such signs were prevalent in France and that's perhaps why the style can also be found in Vietnam — I've told you before that roadsigns reflect a country's history.

I have no explanation for the military pose, however. The same drawing is found in Indonesia, but certainly never in France.

It appears that some countries (e.g. Uganda) are consi­dering reverting to concrete roadsigns because the metallic signs are too attractive to thieves.


The variation of Children's Crossing Signs in Vietnam is beyond belief. It took me quite a while but I managed to group them based on a few features.

First we have a collection where a girl is in front and followed by a boy. Although the quality varies widely the drawing is usually better than in other groups.

The couple of rows below show the second grouping. Now the girl comes after the boy.

The next rows show grown-ups. There is no clear rule about who's leading and some drawings feature people from outer space or beyond. Notice the variation in the bags.

I'm not sure what to think of our last samples.
Are we looking at two boys? Ready to jump the road?
Is the rightmost person a mother trying to keep her offspring off the road?
Path: Home / Country List / Children in depth / Children in Vietnam
e-mail:
More signs from Vietnam: Men at work - Falling Rocks