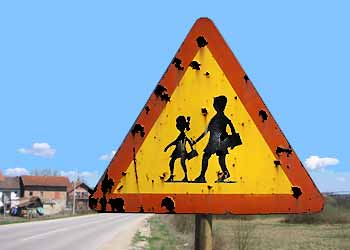 Old and weathered, I wonder how long it will last. It's not exceptionally well drawn, but at least it is not one of the featureless modern monstruo­sities.

The design brings to the mind a sign from Madeira (Porto Santo). We recognize the same solid posture. The children here are a bit more skinny though.

Take a closer look at the girl. I think she has a propellor mounted at the back of her head! And her skirt, I wonder if real school girls can get away with that. 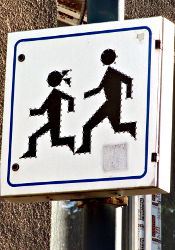 Sarajevo, 21.IV.2016; pict. A. Anselin
Well, could we expect otherwise? Just like everywhere else the future has arrived. Road sign collecting in Bosnia and Herzegovina is dead. Even worse, we are done with the whole Balkan.

A new and tasteless design takes over not only here, but also in Serbia —where the same nice propellor girl could be found— and in Kosovo, and in Croatia, and in Slovenia —where the situation is exacerbated by a plague of fancy roadsigns—, and in Macedonia, and sigh.