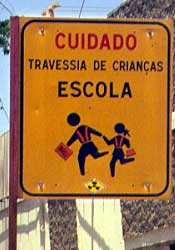 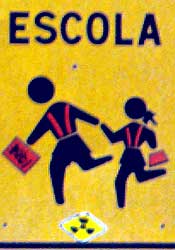 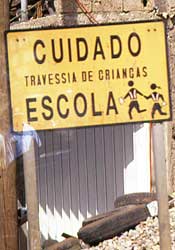 Santiago, 02.IV.2006
The text says Beware - Children's crossing - school but then in Portuguese. At the time of our visit it was a design which was very common on Sal and Santiago. The drawing is based on the most widespread signs around the Mediterranean Sea. Original features — like the boy's head rolling off his shoul­ders and the super mini skirt of the girl — are kept but other features were added giving a rather pleasant end result.

Colour was introduced; sparingly, for maximum effect. A real professional at work I should say.

Still, there is something that's worrying: the red boxes representing the chil­dren's bookbags. Why the different shape? The girl's bag certainly looks peculiar. Is that an antique flat­iron? Are we to understand that she is taking housewifery lessons? (Monsieur Jean, expert in this subject, quietly nods imprinting, indeed.)

Whatever the country, as time goes on, road sign craftsman­ship rapidly degrades. This former Portuguese colony won't stay behind. Any doubt about that is instantly killed by the results of a second visit 10 year after the first finds. 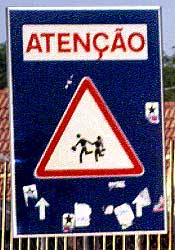 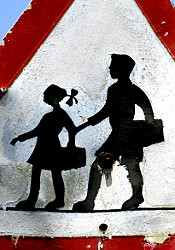 Fogo, 24.IV.2016;
pict. Maes & De Bie
With some luck an older panel can be found with a design which is signaled from The Azores and Madeira, but never from Portugal.

Most of all the new finds, however, are variations of the Mediterranean drawing. The class is explained in Malta. The same evolution happens with the Men at Work signs: newer signs also adhere to the Mediterranean family.

For an archipelago known for its endemic birds and plants it is a lost opportunity to become renowned for its roadsigns also. 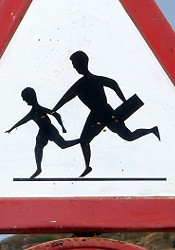 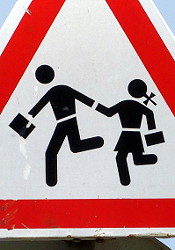 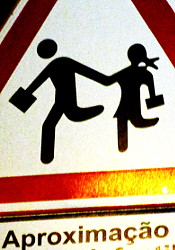