While most Children's crossings in Greece are of a modern type, some older designs can stil be found.

These are real children carrying a bookbag which is far too heavy. They have a face, realistic legs, clothing and hair. Look at the hair of the girl: this is collector's heaven and Monsieur Jean - coiffeur is ready to launch of a new fashion in his salon.

Additional observations:
+ It is the girl who cares for the boy. She doesn't drag him like on signs of the UK-group. She just protects him.

+ The bags are on the outside. That is almost never the case but for countries like The Gambia and Zimbabwe where the girl also has control.

On the modern signs positions and responsabilities are swapped. The design comes closer to the old drawings from many other European countries where the boy is responsible (f.e. Portugal).

The new drawing also adheres to the convention : if the boy holds the arm of the girl then she holds her bag with that arm. The bookbag is therefore found in between both persons (f.e. Brazil, Belgium, etc.). That's of course not possible if they hold hands like in Italy.

The older design is clearly superior to the more recent creations which are rapidly declining towards match-stick drawings. 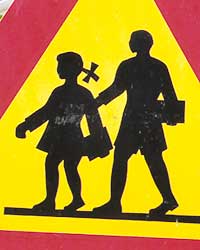 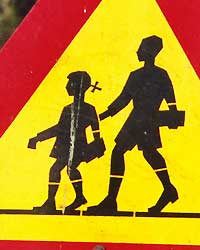 Ioanina, V.2008; pict. H. De Meyer
Several things are happening on the modern signs.
The children are gradually losing their smooth curves and become rather unrealistic: look at the heads, the boy's foot, his hand. Arms and then legs also split apart.
Noticed that one girl succeeded in smuggling a sledge hammer along? I find this particularly disquieting, given the way some schools make it to the news. 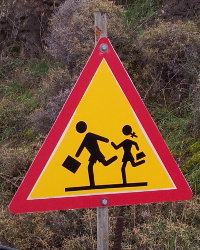 Lesbos, Agra, 29.XII.2012;
pict. B. Hoeyberghs
And now any incentive to visit the country is lost.

We are left with two designs found in many countries: